I recently gave a talk at the maths department informal computing seminar (link) on using the optimizers built into compilers to give a significant performance increase in code. 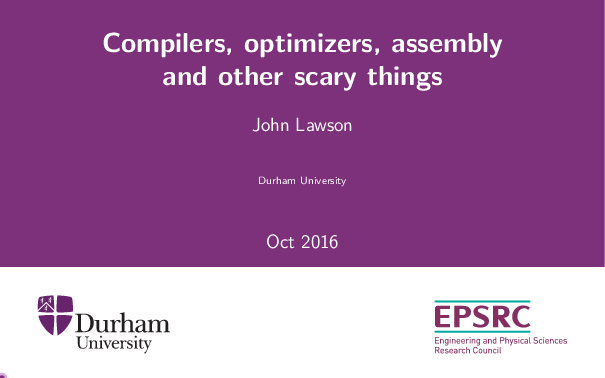 The idea behind the talk came from talking to a friend who knew just enough programming to do his work, but had little idea of the power hiding in his compiler. When I suggested turning the optimisers on his code performed around 10 times fast with no extra work.

This whole talk/post can really be summarised as: use -O3 -march=native when compiling C++. This allows the compiler to do lots of clever things to speed up your code. The code used as examples throughout is available on Github.

A compiler is like a big black box, which takes human readable code and outputs a binary file for the computer to run. Here we will be looking at some assembly, which is an approximation of the machine code and gives some idea of what your processor will actually be doing to compute what you asked it to. 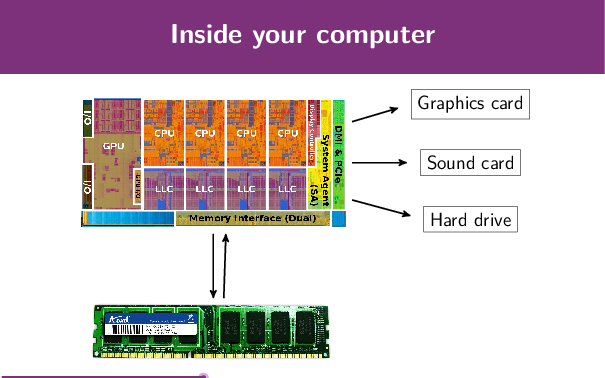 A modern CPU includes much more than just a number of computational cores, they can also include graphics processors, memory controllers and other buses to talk to any peripherals attached to the computer. However, when we look at optimising code we are really only looking at the small area of the processor dedicated to computations and data handling. 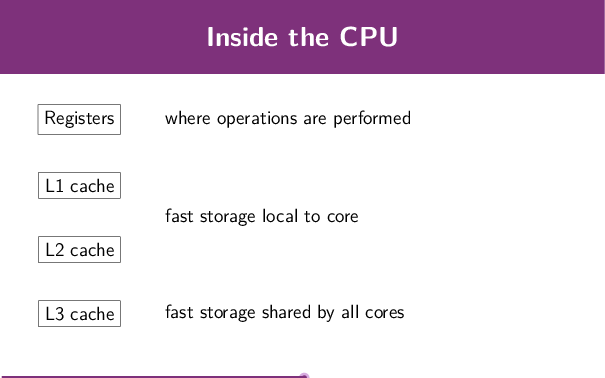 An important idea when looking at assembly is where data is stored. Each CPU core has a number of registers, where maths and other operations can be performed and where data can be stored with near instant access. Further out, the CPU has a number of different caches for storing data, with data access in L1 taking just a couple of nanoseconds, L2 roughly 10ns and L3 around 50ns. Any data which is too big for caches end up in RAM or failing that the hard drive - both of which are significantly slower than the cached store. 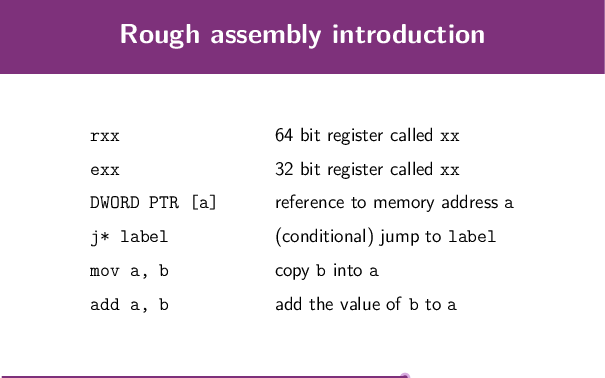 Assembly uses the registers directly, with various ways of accessing them and the data in them. A 64 bit processor can pretend that any of its registers are 64 or 32 bits long, and differentiates between the two in assembly by using either an r or an e prefix.

Here I use the Intel assembly syntax, where results of operations are stored in the first parameter, so add eax, edi adds the value of register edi to the value of eax and stores the result in eax. Similarly mov eax, DWORD PTR [ptr] moves the value of the data at address ptr into the register eax. 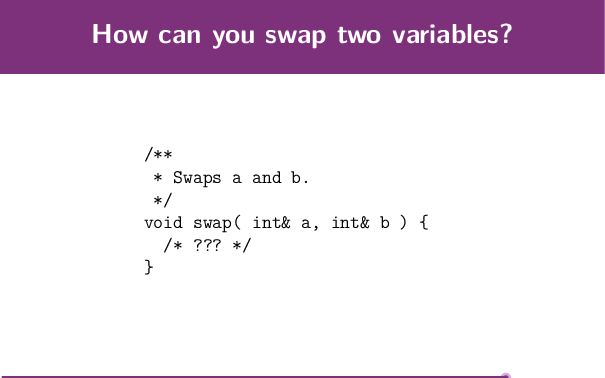 So how about a short example? In a job interview a couple of years ago, I was asked to write a short function to swap the values of two ints. This can be done in a few ways, and in fact the C++ standard library has an easy way to do this using std::swap.

The most common way of doing this is using a temporary variable, which without any optimisations produces the following assembly (in gcc version 6.2):

This code does a lot stuff for such a simple function. It starts off with the address of a in rdi, which gets copied onto the stack (mov QWORD PTR [rbp-24], rdi), then this address which was just written in copied back out into rax (mov rax, QWORD PTR [rbp-24]) before the value of a is read into eax (mov eax, DWORD PTR [rax]). This copying data around is really unnecessary and could be much more efficiently computed as mov eax, DWORD PTR [rdi], but the compiler defaults to doing exactly what the code tells it.

If we now turn on the first level of optimisers, so compile with gcc -O1, we get the much nicer assembly:

Which avoids the pointless copying and simply loads both a and b into registers before copying them back out into memory. Note that although the code specifies the use of a third temporary integer, this never really exists outside the CPU registers.

Other ways of swapping integers include using maths and using bitwise operations:

These other options do not use the temporary variable, so on the face of it look to be more efficient with memory, in stead using more complicated operations. However, when you look at the (optimised) assembly you can see that all the functions have to move the values of a and b into registers - so it really comes down to whether it is faster to do 4 moves, 3 moves, an add and 2 subtractions, or 3 moves and 3 xors.

This is where benchmarks come in:

The swap functions using the more complicated instructions take longer. (Note that there is also a problem in this example where swap_tmp is inlined before the other two functions, which might also contribute to this result.)

However, when the optimiser is turned up even more, and the code is compiled with gcc -O2, all the functions are inlined, and perform the same:

To see what is really going on, we need to allow our swap functions to be inlined and compare the assembly in this case.

Because we want to see how the code behaves when optimised, we need to trick the compiler into optimising the swap function, but not optimising so well that it realises we’re not really doing anything in the function. We use the for-loop and return statement to help trick the compiler, and we get the following:

It turns out the compiler generates the same code for both swap_tmp and for swap_add where the main swapping loop occurs between the labels .L8 and .L6, while swap_xor uses the special instruction xchg ecx, eax which swaps the values in the two registers ecx and eax.

So this is the first lesson of compiler optimisers. Different C++ can give the same machine code, and that compiling without any optimisation will give you exactly what your code asks for, but that is usually much slower than it needs to be.

We also saw that the functions got inlined into the main function above. The assembly shown above contains no call swap_add instuction for example. This is another way that compilers will help to make things faster and prevent needlessly copying data around.

I also used the following function to show off how optimisers can help speed up code:

Here we add up all the entries in an array of ints. This is also implemented in the standard library, we could use std::accumulate instead. With no optimisations, both functions are really slow, and the overhead of the iterators used in the STL version make it even slower than just using pointers.

Using either -O1 or -O2 give the same results, where the difference between the STL version and the pointer version of the function is optimised away.

Both these optimisation levels give the same performance, so one may assume that’s the best you can get, but when you look at -O3, suddenly for the larger arrays the code performs around 3.5 times faster.

To see why we need to once again delve into the assembly. For the -O1 case, the whole function is made up of 16 assembly lines and the inner loop of the accumulate calculation looks like:

Whereas in the more optimised case, the assembly has over 120 lines, with loads more complexity, jumps and comparisons. The interesting thing though is that the inner loop now looks like:

Which uses a new instruction paddd and a different register xmm0. These are from the SSE vector instruction set, which is a completely different part of the CPU and are used to perform a number of the same operations at the same time. Whereas the previous code added each integer to the total sum one by one, this new SSE code can handle 4 integers at once. The code is a lot more complex, so we don’t see a full 4 times speed up, but 3.5 times is still impressive.

There have been a number of advances in the vector processing units on CPUs over the years, but the compiler will be conservative and only use the most widespread instructions. If we also provide the -march=native flag to the compiler, then it can use whatever your hardware supports (on the machine which compiles the code), so if your computer can handle additions on 8 integers at once, then adding this flag will allow the compiler to compute more stuff at the same time. 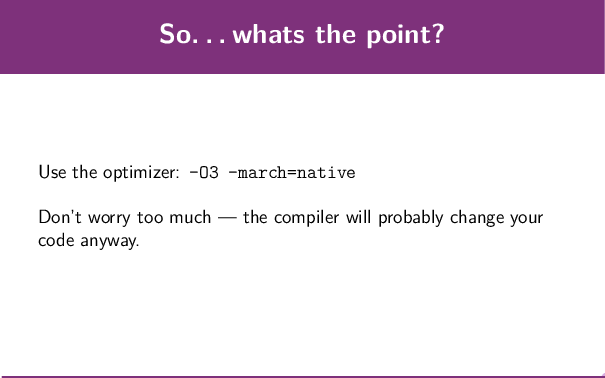